"Don't talk to Africa"
That is the unchangeable rule in Chinese history.
The Chinese government put a port on Shanghai to trade to Africa.
The office has the territory is the sea.

The westen direction office from the Chinese border is in Ankara.
The government of Ankara is recognized from Europe.

To support different people China will not join the UN staff.
We have Ankara.We have Shanghai.


・South China Sea has many island.
島が好きな民族
ロシアで「鶴女房」を上演
Okinawa Off Base Housing

They brought up the children to make a new news in Europe.
They believe that only good children are increased.
天馬の国62 おばあちゃんの国

This year we need to talk to Moscow,Syria.
Prince William occupied Palestine and Israel,what kind of border do we have.

<BLACK PEOPLE AND JAPAN>
Miserable entertainer are surplus in India.
Which kingdom's language can we hear from them?
I would like to work at the bakery factory I am not interested in the Japanese government.
But if India needs it I can speak African language.
Is it necessary for India?
If you teach it and Japanese government will all speak African language.
Japanese dancing seems to be origined African kingdom that India wanted.
Japan is necessary.India prepares Japanese meals for travelers.
I can see the castle in the farest African ground where they lived.
They have much money and stay all city,laxuary hotels are prepared for their visit.
They think I am a Japanese,poor and white.We care they are working at Italian restrant.
I think their castle isn't Palace of Savoy.

I know Italy gave the car to Japanese musicians.
What did China give to entertainers?
Nobody imitates them,why?
I hope children in USA can write a letter.
The only thing they have foods and their university.
They think they want a high status with it.
We always tell to the Prince"we have nothing to eat, give us food."
If U.S.army arrives and we can say the same thing.They feel royalty.
If they give a car or something amazing everyone will be impatient.
A Japanese who has a field is already a candidate for a marriage partner of an American soldier.
The equal status was appreciated as a very great person.

Musicians are Japanese celebrity have government.
It must be Italian kingdom.

To make same government,get cars first, and give it to someone else.
You ask me do you have my car?

Savoy family is a powerful marriage partner of the French royal family.
The prince run away the castle in Italy is watching Japan.

They are Christians who want to be independent from Islam.
In Japan we just say that their colors are white.

I think USA is admireble for Italy that wants living separately from black.
The US government calls the Principle of Italy as the Japanese government.
American says that the kingdom doesn't need colored races.

After all I think I am absolutely black in China.
I don't want to go to the castle in Tokyo,Italian don't need us from the first time.
Japan is going to appear soon.

Then,China also possess another kingdom in Japan.
The only problem is left,where are the black people come from.
I may answer yes I came from Jamaica(British territory) but there is no proof.
I think we are from USA,but you think NO?

I can eat McDonald's Hamburger in Japan.
I should have heard what America says.
I should learn American thinking.
I guess it is better to see the American news every day and talk in English.
I think president Obama is serching for his government but is he also from Italy?

Then we should think that all USA peole were from the islands of Britain or Japan.

But you still think "what is this blog?"


Do you know what does India talk to us?
I don't know but nobody go to India to hear their talks?
インドの言ってること

"Suddenly there was White house."

I know they bought catsle.
It is a big problem in China.


This is a Story of history in China

In Western China there is a small and solid castle.
It is isolated in a desert.

It was quite wealthy inside the wall.
They knew how to wrhite letter,big jewels were treasure.
They also showed the treasure.

It was written in the book,
"Buddhatold there was Kosala country to tell his teachings.
But Buddha left the castle and wandered around.
He stayed at this Castle."
They told Chinese that they were descendants of Buddha.

In the Han dynasty,General Huo was established the castle to command the Middle area.
I recognized the castle as Śrāvastī castle(舎衛城).
Wei(衛) was his mother's name.
His mother's relative married Han Chinese Emperor.

I think they showed big jewels to China and I believed them to trade.
Her castle was the entrance to a city of fortification in India.

That castle has now become Xining City.
The place gave to the world Dalai Lama XIV.

"What does he want in the US?"

I don't know..
That's why dependant had ceased to live Chinese Palace in Beijing.
India didn't allow Chinese Emperors too?

I found the map.
There is a big lake at the end of that castle.

I thought that I reached the sea for a long time .
The road leads to the entrance of the mountain, a dead end near India. 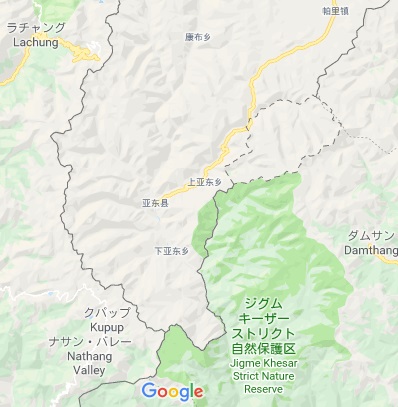 Then we go to the kingdom of Nepal by the road.

He also needs relatives of the British royal family?

Are those Buddhisut Indian descendant of the ancient Egyptian dynasty?
They managed the kingdom of Israel?
But they failed.

I didn't know that China gave them HongKong island before.


・Did Chinese government give money to rare entertainers in Japan?
スペインの叙爵システム
イスラエルの歌のこと

・But do you know what is "ITALY"?
湾岸とキャンプ
In Japan,children are walking in the town to say "Italy" .


Who needs wandering children for bride.
He came to island from Italy.

They said that his ancestor lived in Sardinia.
King has children.
Mini Skandinavsky
最近のイタリア王子