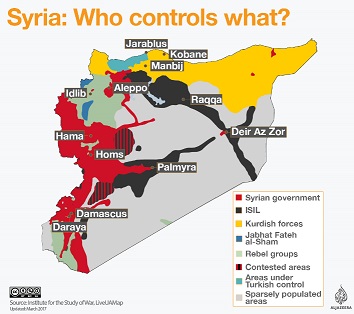 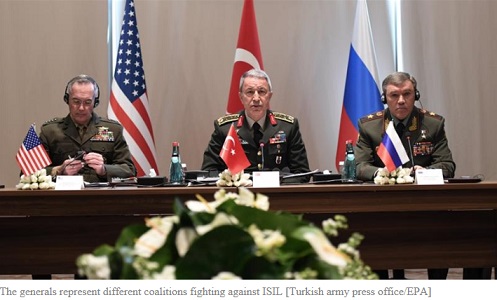 The top generals from Turkey, US and Russia have met to discuss developments in Syria and Iraq to prevent " the risk of a conflict" during their fight against ISIL.

Hulusi Akar, Turkish chief of staff; Joseph Dunford, US chairman of the joint chiefs of staff; and Valery Gerasimov, Russian chief of general staff, met on Tuesday in the southern Turkish city of Antalya.

"Common issues relating to regional security, in particular Syria and Iraq, are being discussed at the meeting," the Turkish army said in a statement, without giving further detail.

Russia confirmed the news of the meeting, with the defence ministry saying in a statement to Russian news agencies: "A joint discussion on security issues in Syria and Iraq is planned."

"There is a need for an effective coordination in the efforts to clear Syria of all terror groups because so many countries are involved there," he said.

"If we cannot establish coordination, the risk of a conflict that we would not desire can emerge. That's the real aim of the meeting."

The unannounced meeting came amid rising tensions in northern Syria where Turkish troops and allied Syrian fighters, US-backed Kurdish-led forces and Russian-allied Syrian troops are fighting their way towards Raqqa, the de-facto capital of the Islamic State of Iraq and the Levant (ISIL) group.

Turkey, a NATO ally, views the Kurdish group that dominates the Syria Democratic Forces (SDF) as "terrorists" and has threatened to drive them from the northern city of Manbij, which the SDF captured from ISIL last year with the aid of US air strikes.

Turkey and Syria, meanwhile, support opposite sides in the Syrian civil war.

The US has a few hundred special operations forces embedded with the SDF and wants the alliance to lead the march on Raqqa.

The Pentagon said on Monday that US forces have also taken up positions on the outskirts of Manbij to try to keep a lid on tensions.

Sherfan Darwish, the spokesman of Manbij Military Council, which is a part of SDF, told AFP news agency on Tuesday that "some villages and points on the western side of the town of Al-Areima have been handed over to border guards of the Syrian regime".

He said the handover was carried out "with the goal of curbing Turkey's expansion and its occupation of Syrian territory, and to ... prevent the shedding of civilian blood".

He declined to give further details but the Syrian Observatory for Human Rights (SOHR), a Britain-based monitor of the war, said the handover took place on Monday and involved fewer than 10 villages.

Rami Abdel Rahman, the head of SOHR, described the handover as "for show".

"Members of the Manbij Military Council simply put on army clothes and raised the Syrian flag to avoid friction with the Turks," he told AFP.

There was no mention in Syrian state media of the handover to government forces.