Turkish Prime Minister Binali Yildirim has said that the Israeli embargo on Gaza has been "largely lifted" as part of the reconciliation deal between Israel and Turkey.

The Middle East powers announced details of the deal after talks in Rome on Monday aimed at ending their bitter six-year rift over a deadly Israeli army raid on a Turkish flotilla to Gaza in 2010.

The deal will see Israel provide economic compensation worth $20m to the families of the 10 Turkish citizens killed by Israeli forces who raided the six-ship flotilla  heading to break the Israeli siege on Gaza and provide humanitarian aid to the almost two million Palestinians living there.

In addition to the compensation, the agreement will allow Turkey to deliver humanitarian aid, build a 200-bed hospital, a housing project and a desalination plant in Gaza, under the condition that materials go through the Israeli port of Ashdod first.

"To this end, our first ship loaded with over 10,000 tonnes of humanitarian aid will leave for Israel's Ashdod port on Friday," Yildirim said.

During a news conference in Ankara, Yildirim said that with these concessions the siege on Gaza was "largely lifted".

Israeli Prime Minister Benjamin Netanyahu, however, denied that the siege would be removed, at a parallel news conference in Rome.
Materials entering the strip will only be allowed in through Israeli channels.

Al Jazeera's Jamal Elshayyal, reporting from Ankara, said that this means the siege was still in place as "anything that is reaching Gaza still requires Israel's approval".

After the deal is signed on Tuesday, the approval process will start in both countries, with the Turkish prime minister saying Ankara would appoint an ambassador to Tel Aviv within weeks.

As part of the agreement, Netanyahu said the two countries will be coordinating a gas deal in which Israeli gas will be chanelled to Europe through Turkey. His Turkish counterpart said it was too early to speak of such a deal.

Turkish officials also said no references were made to Hamas in the agreement, while Netanyahu announced in Rome that the parties had agreed "all of the terrorism against Israel from Turkish soil will stop".

Both sides have been seeking reconciliation in recent months, with Israel in search of a potential customer for its offshore gas exports and Turkey wanting to restore its regional clout.

"Turkey will continue to support the residents of Gaza and thanks to this agreement our relationship with Israel is normalised," said Yildirim, adding that Israel had already apologised for the Mavi Marmara incident.

The Hamas political movement, which controls the Gaza Strip, has said it hopes that the agreement would have a wider impact across the Palestinian territories. 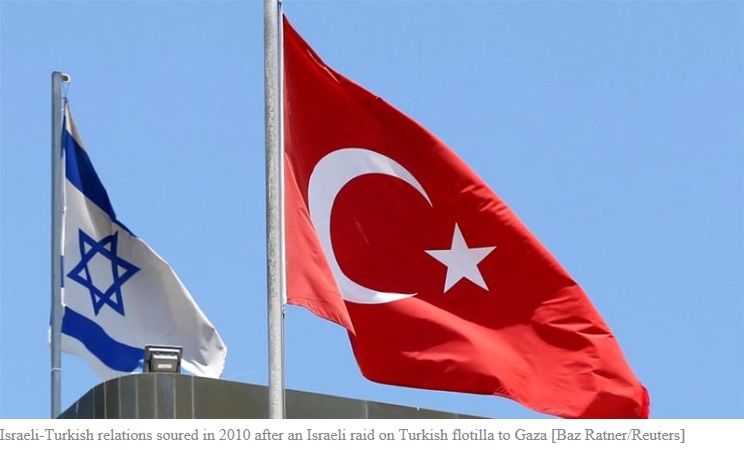 
The Middle East powers over a deadly Israeli army to Gaza.

During a news conference in Ankara, Yildirim said that with these concessions the siege on Gaza was "largely lifted".