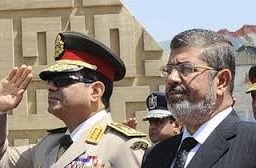 President Abdel-Fattah El-Sisi stressed on Wednesday Egypt's full support for efforts to restore peace and stability in South Sudan during a meeting with Festus Mogae, the Chairperson of the Joint Monitoring and Evaluation Commission (JMEC) for South Sudan, in Cairo.

The Egyptian presidency spokesman Alaa Youssef said that El-Sisi and Mogae discussed recent developments in South Sudan and regional efforts for peace. The topics included the Intergovernmental Authority on Development's (a trade bloc in Africa) proposal to deploy regional forces under the auspices of the United Nations mission in South Sudan, according to the statement.

El-Sisi also expressed Egypt's willingness to consult with South Sudan's government and African states in the UN Security Council on the proposal to push for a peace process and political settlement, Youssef said.

Mogae, who is also the former president of the southern African nation of Botswana, expressed appreciation for Egypt's efforts to ease the tension between the conflicting parties, particularly in the light of its membership in the Security Council and the African Union's Peace and Security Council.

On 7 July, violence erupted in South Sudan’s capital of Juba between forces loyal to President Salva Kiir and those loyal to his long-time rival and former deputy Riek Machar.

The resumption of violence on this day fell on South Sudan’s independence anniversary – which makes it the world’s youngest nation -- from North Sudan.

Days after, a ceasefire was signed between President Kiir and his Machar after the death of over 300 soldiers in deadly battles, according to government estimates.

South Sudan has been caught up in more than two years of civil war after Kiir sacked Machar as vice president in 2013.

The ensuing violence has killed more than 10,000 people and displaced more than 2 million, many of whom have fled to neighboring Uganda, Ethiopia, Kenya and North Sudan.