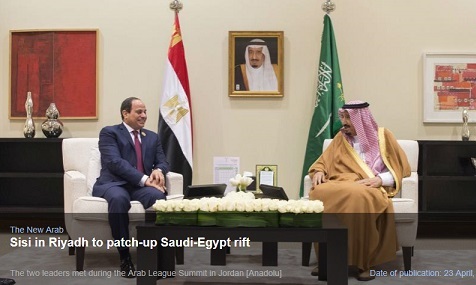 Egyptian President Abdel Fattah al-Sisi arrived in Riyadh on Sunday for talks with Saudi King Salman in a bid to end to an ongoing rift between Cairo and the Kingdom.

The visit comes in response to an invitation extended by King Salman earlier this month when the two leaders met on the sidelines of the Arab League Summit held in Jordan.

The two leaders will discuss ways to boost bilateral strategic ties as well as regional and international issues of joint interest.

This includes counter-terrorism issues according to a statement released by Egypt’s presidency late on Friday.

They will also discuss investment opportunities pledged by Saudi Arabia to Egypt.

Top of the agenda, according to the same sources, is the issue of a maritime border demarcation deal signed during King Salman’s visit to Cairo in April last year.

Egypt agreed to hand over two strategic Red Sea islands to Saudi Arabia but this hasn't gone as planned for either government.

Sisi insisted the islands are technically Saudi, but the agreement sparked the largest anti-government street demonstrations since the former general took office in 2014.

Many Egyptians were infuriated by the "betrayal" and described it as a sell-off to the kingdom.

Earlier this month, an Egyptian court voided a previous decision to block the transfer of the islands.

The controversy over the islands became a source of tension with Saudi Arabia, which has provided billions of dollars of aid to Egypt in the immediate aftermath of the 2013 military coup against former Muslim Brotherhood leader Mohammad Morsi.

Tensions have also emerged over other issues, including disagreements over Syria.

Saudi Arabia is a leading supporter of the Syrian opposition, while Egypt, fearful of Islamist militants among the rebels' ranks, has pushed for a political solution keeping Assad in power.

King Salman has also sought closer ties with Turkey and Qatar, which have tense relations with Egypt.